Derived from the Latin word “debere,” which means “to borrow,” the term “debenture” refers to a written tool or long-term security that yields a fixed interest rate. It is issued by finance companies and secured against assets.

The debt instruments are referred to as bonds which act as an IOU between the lender and borrower. Debentures are availed by companies when they require funds at a fixed interest rate for expanding their business.

Debentures comprise a prefixed agreement for repayment of the principal amount after the arrival of a particular date or at intervals. Other repayment options may be based on terms decided by the lending firm. When it comes to the payment of the interest at a fixed rate, it is usually done either annually or semi-annually.

As per section 2(30) of The Companies Act of 2013, debentures comprise debenture inventory, bonds, and numerous other securities of a particular enterprise.

Different debentures are distinguished from each other based on their redemption date, tenure, security, redemption method, convertibility, rate of interest, coupon rate, etc.

A debenture is considered a vital instrument and method of acquiring loan capital by a company. In actuality, a debenture is a loan certificate or bond evidencing that the company is bound to pay a set amount along with interest. Even though the funds raised by the debentures become an integral part of the firm’s capital structure, it does not become a part of the share capital. 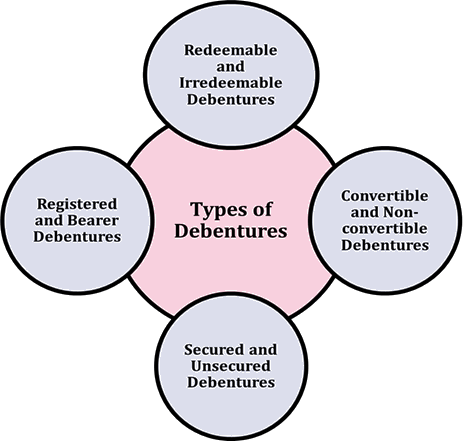 Debentures are classified into different categories, depending on numerous factors such as redemption period, interest rate, coupon rate, etc. Here are some of the most popular variants of debentures:

In registered debentures, all details regarding addresses, names, and the particulars of holding of the respective debenture holders are filed and stored in an official book or register kept and managed by the enterprise.

Bearer debentures are a variety of debentures that can be transferred from one entity to another by the method of delivery. Moreover, the company does not store official records of the holders.

The interest charged on the debenture is paid to the individual who produces the interest coupon attached to such debentures.

Secured debentures are types of debentures secured by a specific charge on a company’s assets. Also referred to as mortgage debentures, the holders of secured debentures hold the power to recover the principal amount and a higher amount of interest out of the assets mortgaged by the company.

In the case of secured debentures, the company makes a default in payment. Moreover, the debenture holders hold the right to recover uncleared dues from the property they have mortgaged or pledged as collateral.

An unsecured debenture refers to a type of debenture where agreements regarding the debenture’s terms and conditions are outlined. Moreover, customers are not required to pledge any asset as collateral to acquire the loan.

Since no asset is required to be used as security, unsecured debentures often feature a high rate of interest.

With unsecured borrowing, lenders face significant risk. However, to mitigate it, they often ask for a personal guarantee before issuing the loan capital.

Redeemable debenture agreements cover the precise time and method of repayment that debenture holders are bound to follow.

Another instance when irredeemable debentures can be redeemed is when they reach their expiry date or if the issuing firm is ready and willing to return the borrowed loan capital.

As the name suggests, non-convertible debentures are debentures that cannot be converted into shares or equities. This type of debenture is used as a tool to raise long-term funds by firms and organizations through a public issue.

A second debenture refers to the variant of a debt instrument paid back after the first debenture is cleared by the debenture holder.

Here are some of the most prominent features of different types of debentures:

Advantages of Debentures over Shares 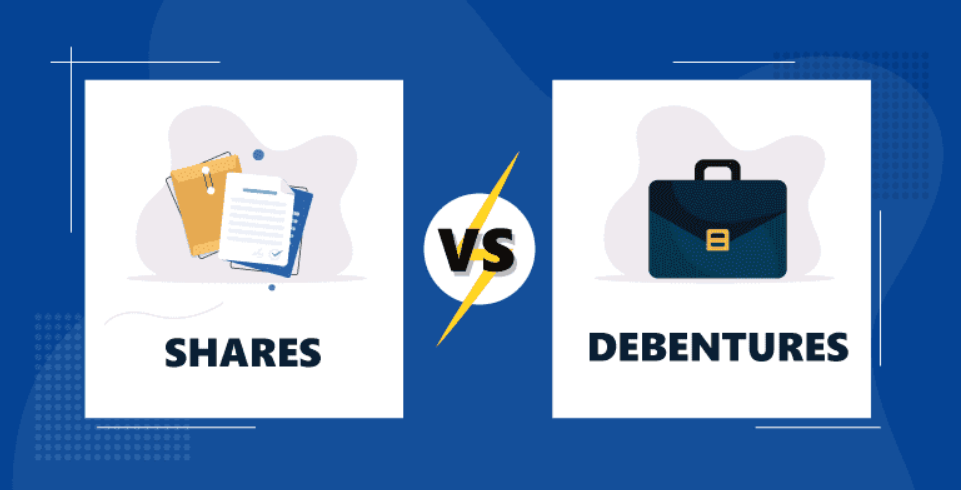 There are numerous advantages of opting for debentures over shares. Here are some of the most prominent ones:

It facilitates in avoiding ownership dilution

The majority of the companies raise funds by issuing shares. Even though it is an effective method of raising funds, every time a company issues shares, it dilutes the company’s ownership. On the other hand, debentures are deemed a company’s debt, i.e., they do not provide holders any ownership rights.

Hence, if a company opts for issuing debentures instead of shares, it facilitates them to prevent ownership dilution. Moreover, even though earnings per share or EPS will be impacted, the impact is fixed. Furthermore, it is measured since debentures feature a fixed rate of interest.

It is an effective method of temporary financing

In the case of any company or firm, shares are considered permanent security instruments, meaning that once the company issues shares, they cannot be called back or redeemed. On the other hand, debentures are easily redeemable.

Debentures can be issued by a company whenever there is a requirement for funds, and they can be paid back whenever the company has surplus amounts of funds. Moreover, the company also has the option to call for the redemption of debentures before the arrival of the maturity date. Hence, issuing debentures is an effective method of temporary financing instead of shares, which offers a more permanent solution.

It helps in managing and maintaining a company’s ownership structure

On the other hand, if the company issues debentures, individuals who purchase it will not be deemed, shareholders. Hence, it will not affect the ownership structure in any way whatsoever.