Why Is Retail Inflation Inching Up to 7% YoY in August 2022?

Consumer Price Index (CPI) which measures retail inflation touched 7% YoY in August 2022 compared to 6.7% in July 2022. Core inflation (which excludes food and fuel) increased to 5.8% YoY in August after some moderation in July. The Russia-Ukraine crisis increased the demand for Indian wheat and prices of rice increased by 6.9% YoY against 4.3% in previous month. The government has imposed 20% duty on export of certain categories of rice to control domestic inflation and extended the concessional customs duty on imports of edible oils. For eight straight months, inflation remained above 6% – which is upper tolerance band of Monetary Policy Committee (MPC). It is expected that the MPC will continue with its rate hike to tame inflation.

Retail inflation measured in terms of consumer price index (CPI) again touched 7% YoY in August 2022 compared to 6.7% in July 2022  and 5.3% in August 2021 i.e. corresponding month of the previous year, driven by broad based increase in prices. The price momentum accelerated as sequentially CPI increased by 0.52% in August against 0.46% in July.

There was significant price momentum in food inflation as it inched up by 0.74% MoM in August compared to a soft figure of 0.06% in July. Fuel and light continued to increase at double digit by 10.8% YoY compared to 11.7% the month before.

The Russia-Ukraine crisis increased the demand for Indian wheat. Domestic wheat production also got impacted due to heat waves earlier. Prices of rice increased by 6.9% YoY against 4.3% in previous month. So far in the kharif season the paddy acreage is down by about 3.8mn hectares which might put pressure on cereal prices.

However, the government has imposed  20% duty on export of certain categories of rice to control domestic inflation of cereals last week. Inflation in milk products increased by 6.4% YoY compared to 5.8%. Inflation in oil and fats contracted by 1.7% MoM. The government has extended the concessional customs duty on imports of edible oils till March 2023 to check the prices. Vegetable prices increased further to 13.2%YoY vs. 10.9% in July while prices in pulses increased by 2.5% YoY.

Core inflation was driven by elevated prices in clothing and footwear at 9.9% YoY. Inflation in housing inched up to 4.1% YoY. Household goods and services increased to 7.5% YoY.

For eight straight months inflation remained above 6% which is upper tolerance band of Monetary Policy Committee (MPC). The crude oil prices have come down recently, however, this may not translate into lower retail prices immediately. 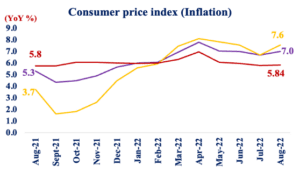 The base effect will keep inflation at elevated levels between September to November. Higher cereal prices will weigh on the overall inflation. Erratic monsoon could impact the vegetable prices.

All these factors will keep inflation elevated in next month. However, arrivals of kharif harvests in the mandis will help check inflation to some extent. We expect CPI inflation to average ~6.5% in FY23 with some upside bias. We expect the MPC to continue with its rate hike and deliver another 25-35 basis points rate hike in September meeting to control inflation.