Monetary Policy Preview: What Lies Ahead for MPC After a Hawkish Fed?

Last week the US Fed increased the policy rate on expected lines by 75 basis points to take the target range of federal funds rate to 3-3.25%. The hawkish policy guidance by the US Fed had led to increased volatility in the market with dollar index went multi year high.

Between 21 September and 26 September, the 10-year government bonds yield in US increased by about 30 basis points as the FOMC raised fed funds rate projection  to 4.6% in this rate hiking cycle by 2023.

Domestically, the rupee depreciated and breached 80/USD. The RBI has been doing forex intervention to reduce volatility in the exchange rate. The forex reserve of RBI came down to USD 550.81bn at the end of the previous week – down by USD 5.2bn from the week before.

Domestically India’s growth parameters are bright. Credit growth of SCB’s have remained robust and stood at 16.2% in the earlier fortnight.

Vehicle sales increased by 20% YoY in August 2022, cloaked a 3-year CAGR basis of 1.7% including Covid impacted period. GST collections continued to remain robust and stood above INR 1.4tn for the sixth consecutive months till August.

The PMI service index inched further up to 57.2 in August from 55.5 in July. Manufacturing PMI also remained steady at 56.2 in August.

Both capital goods production and capital goods imports are witnessing positive yearly growth and also are positive in 3-year CAGR terms. The capacity utilization stood now at 75.3% in the manufacturing sector.

We believe that global growth is expected to slow down due to rate tightening in US, Covid-19 localized lockdowns in China, etc. This will impact exports and will weigh on domestic growth.

We expect the marginal propensity to consume to revise its GDP growth projection lower than its previous forecast of 7.2% for FY23 as Q1 GDP grew lower than MPC’s projection and transmission of higher rates in real economy.

Inflation after easing for three straight months had picked up again in August to 7% with sharp increase in food prices. Inflation in next few months through September to November will remain elevated due to base effect of last year.

Moreover, there is pressure on the food inflation side due to higher prices in cereals. Spatial distribution of rainfall has remained uneven.

This will have its impact on overall inflation. However, inflation will come down in H2FY23 as crude and commodity prices came down recently on growth concerns. MPC is expected to retain its inflation forecast around its previous projection of 6.7% for FY23.

The banking system liquidity has come down substantially. From a surplus of INR 2.08tn on 05 August it came down to a deficit of INR 79bn on 26 September.

The FPI outflows and higher imports made RBI to intervene in the forex market to stabilize rupee. Reduction in system liquidity has led to rise in short term rates.

Weighted average call money rate stood at 5.35% on 26 September 2022 from 4.74% on 01 August. The ongoing festive season will increase currency in circulation that will further drain liquidity. We expect RBI to keep liquidity at neutral level.

The MPC has raised the policy repo rate so far by 140 basis point in this rate hiking cycle starting from May.

We expect the MPC to deliver a 50 basis points hike in repo rate in this policy meet to control inflation as well as to check rupee depreciation.

With FOMC increased its fed funds projection sharply to 4.4% in 2022 and to 4.6% in 2023, we expect the MPC to continue with its hiking cycle and can take the terminal repo rate to about 6.25% by December 2022.  However, there could be an upside to this given Fed’s fast tightening. 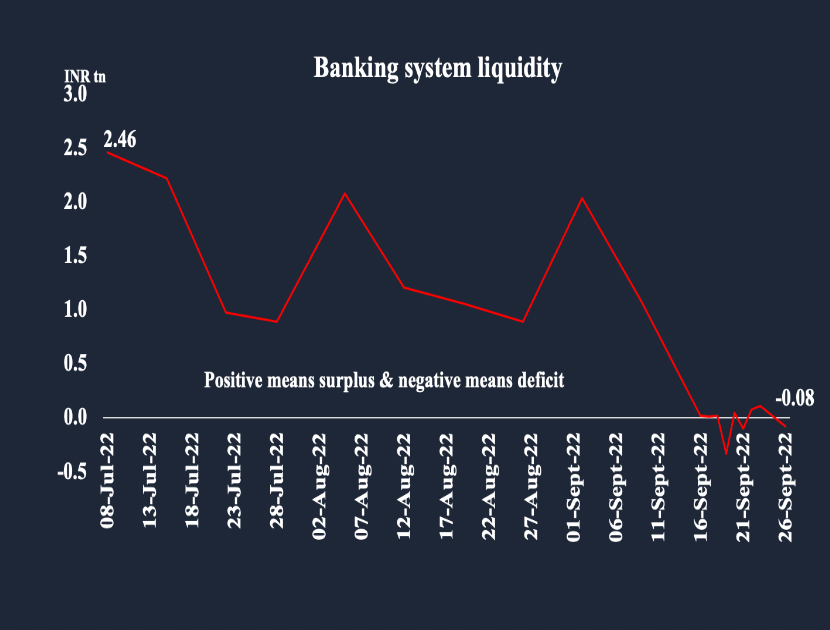 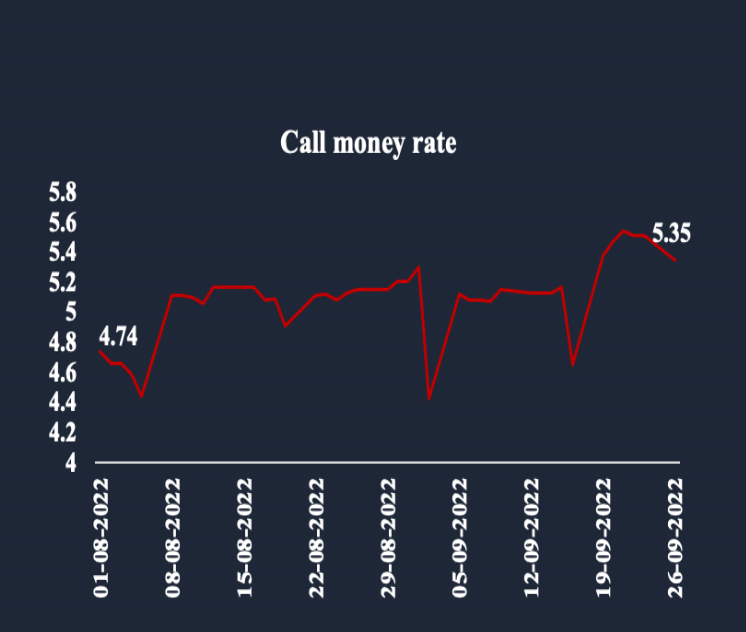 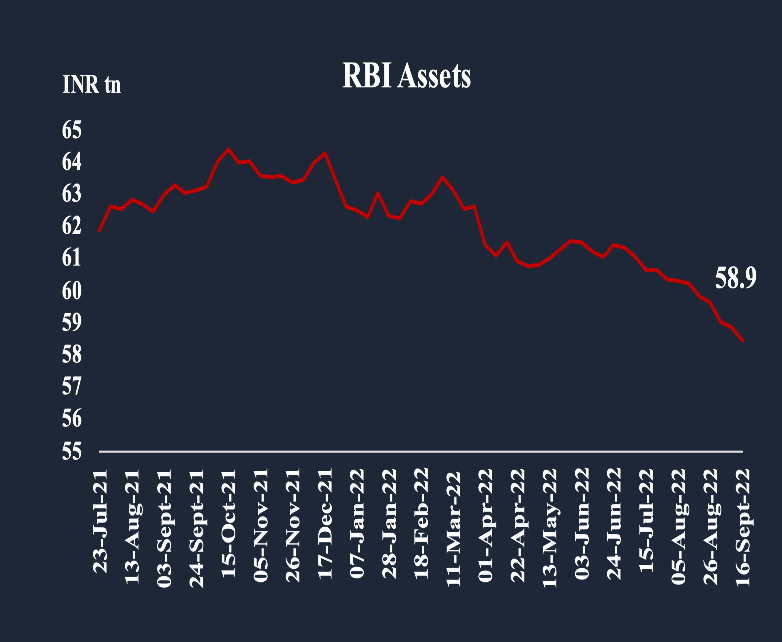 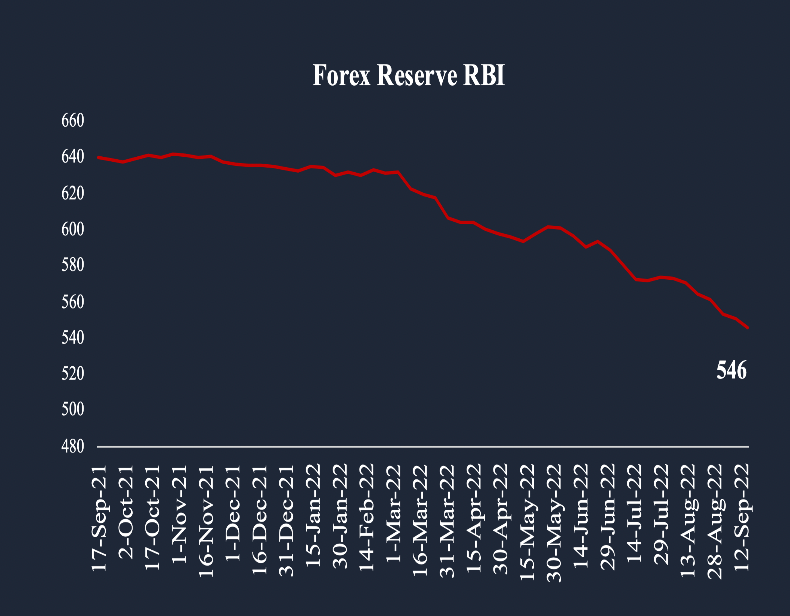 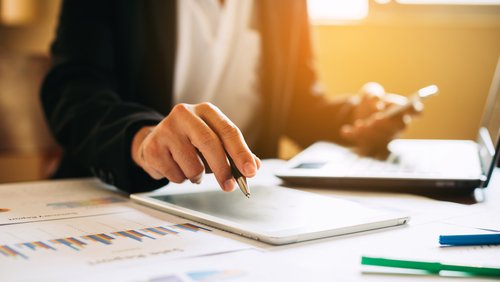 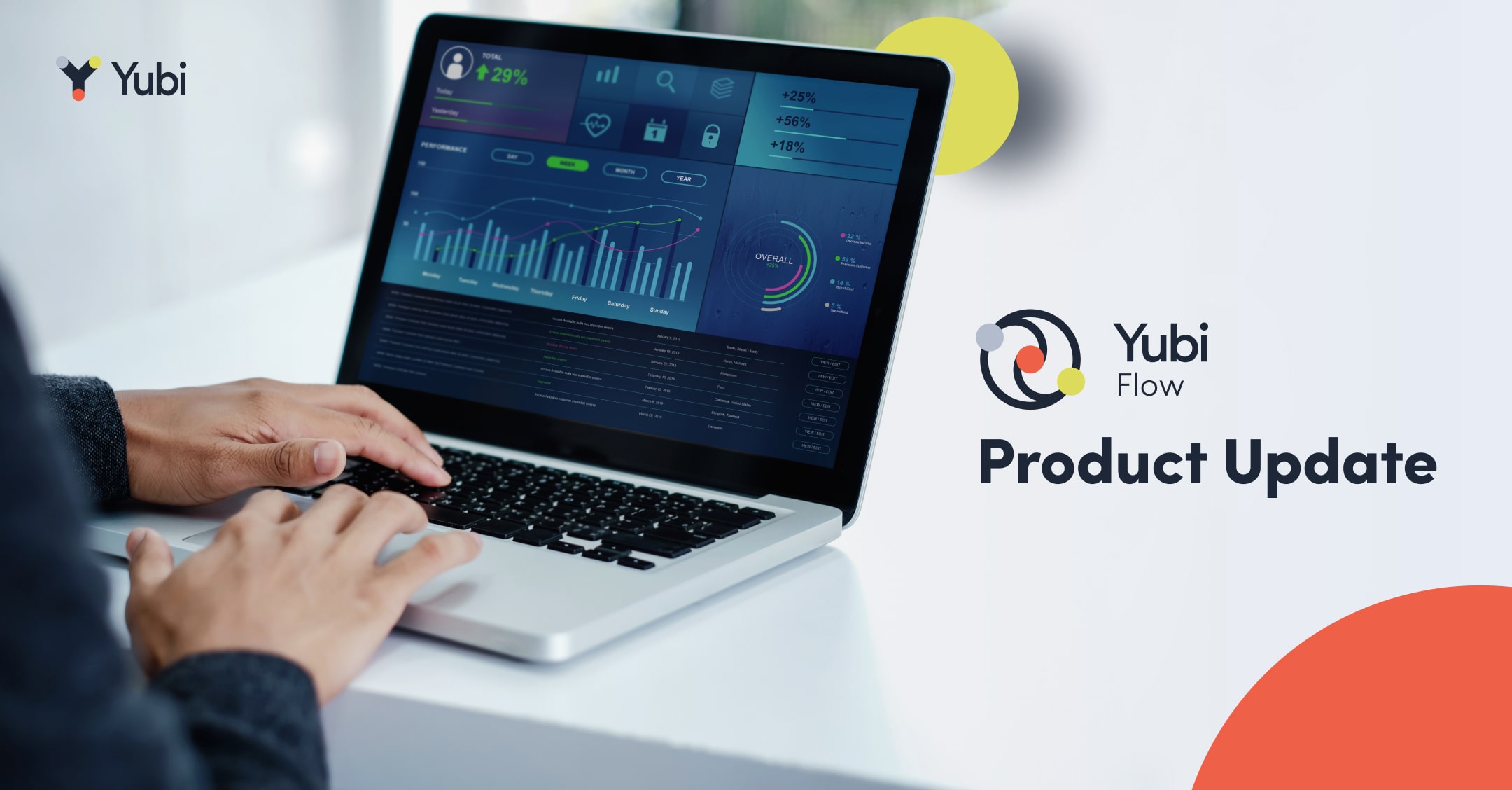